HUGO BOSS is very well known around the world thanks to the appeal of its brands and its early entry into international markets, particularly through franchise partners. The Company sees substantial opportunities for commercially exploiting this brand perception in the coming years more thoroughly than in the past and for gaining a firmer footing in markets in which the Group's presence is still relatively weak, particularly fast growing markets. To this end, the Group will expand its own retail business in particular. It is therefore expected that the share of sales generated outside Europe will steadily increase in the next few years. 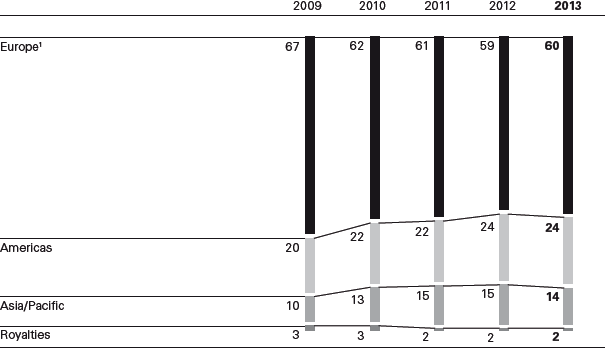 1 Including Middle East and Africa.

However, Europe will remain the Group's largest sales market. In addition, the Group is supplementing its established presence at wholesale partners by growing its network of own stores. It is thereby strengthening the homogeneity and value of the global brand image and is raising the appeal both for local consumers and the growing number of non-European customers who visit the region as tourists. Motivated by these considerations and in response to the challenging business situation faced by many of its business partners, HUGO BOSS has also increasingly begun to directly operate wholesale spaces itself. This has allowed the Group to generate growth that outstrips the average sector growth in many markets. Apart from expanding its market positioning in traditional mainstay markets like Germany, Great Britain, France and the Benelux countries, the Company feels that there are attractive growth opportunities in Eastern Europe, especially in Russia. Building on the direct market entry in fiscal year 2013, the Company will to a larger extent control its distribution in this market itself in future.

Strong brand perception forms foundation for success in the Americas

HUGO BOSS enjoys a sturdy market positioning in the Americas. It is primarily anchored in a favorable perception shaped by associations with the European lifestyle. Apart from modern design, HUGO BOSS is attributed a high degree of reliability with respect to fit and quality as well as an attractive value proposition. HUGO BOSS wants to increasingly take advantage of these strengths, also as regards parts of its portfolio that have had a less profiled presence until now, such as the HUGO brand or the womenswear line. The latter should benefit in particular from the huge reputation that the new Artistic Director, Jason Wu, has in the region. In the wholesale business, the Group is concentrating on partnering with retailers in prime market segments. Optimization of brand presentation, both in the category business but also increasingly in shop-in-shop formats, partly also under the Group's control, serve as key growth levers in this context. In the retail business, the focus is on selected new openings, particularly in Latin America, as well as in enhancing the shopping experience.

As the middle class steadily grows and premium and luxury goods become more affordable due to the accompanying increase in purchasing power, HUGO BOSS is seeing substantial sales potential opening up in Asia, and particularly in China. Consequently, the Company is investing in the quality of its retail presence and brand perception. The exclusivity of the brand presence is being augmented by opening flagship stores in cosmopolitan cities like Shanghai and Hong Kong, but also by renovating existing stores. Expansion of training activities together with the implementation of structured IT-enabled customer relationship management also serve to improve the shopping experience. Brand communication is being built up with a focus on multi-channel measures that link up events such as the fashion show held in Shanghai in 2013 with social media and digital marketing initiatives. The Group also sees substantial growth opportunities in the expansion of its offering of premium businesswear for men, as its share in sales in Asia is significantly lower than in other regions. There are also further pools of potential in the segments of luxury sportswear, womenswear and the HUGO brand, which reaches out to a fast growing number of fashion-conscious young people who want to stand out from the crowd with a personal look.