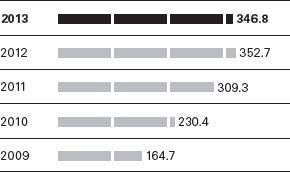 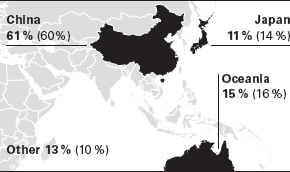 After currency adjustments, sales increase across all markets in the region

At EUR 211 million, sales in China remained at the prior-year level (2012: EUR 211 million). Adjusted for currency effects, the sales increase was 2%. The still difficult environment in the retail business again burdened the development of sales here. In Oceania, sales totaled EUR 53 million, down 5% year on year (2012: EUR 56 million). Despite the still challenging market environment, it was possible to post a sales increase after currency adjustments of 6%. At EUR 39 million, sales in Japan were down 18% on the prior-year level (2012: EUR 48 million). This development is mainly influenced by the depreciation of the Japanese yen against the euro. After currency adjustments, sales increased by 3% year on year.

The segment profit for Asia/Pacific came to EUR 117 million, down slightly on the prior year (2012: EUR 119 million). The improvement in the gross profit margin fully compensated for the increase in fixed costs caused by the expansion of the Group's own retail business. At 33.8%, the adjusted EBITDA margin was slightly above the prior-year level (2012: 33.7%).