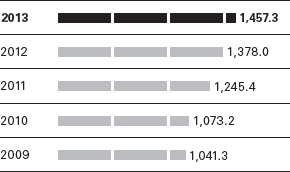 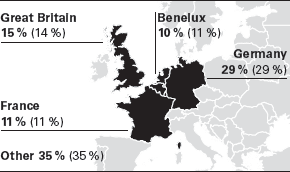 Sales in Europe including the Middle East and Africa increased in the Group's reporting currency by 6% to EUR 1,457 million in fiscal year 2013 (2012: EUR 1,378 million). This corresponds to an increase of 7% in local currencies.

At EUR 417 million, sales in Germany were up 4% on the prior-year level (2012: EUR 401 million). The takeover of selling space previously operated by wholesale partners supported the positive development of the Group's own retail business. Accordingly, the wholesale business reported a slight decrease. Likewise in Great Britain and France, double-digit sales growth in the Group's own retail business compensated for the decrease in sales generated with wholesale partners. Sales in Great Britain in the Group's reporting currency, reached EUR 215 million, up 9% on the prior-year period (2012: EUR 197 million). In local currencies, this corresponds to sales growth of 14%. At EUR 166 million, sales in France were up 13% year on year (2012: EUR 147 million). Owing to the difficult market environment in the Netherlands, sales in the Benelux countries came to EUR 153 million, down 3% on the comparable prior-year period (2012: EUR 157 million). In the past fiscal year, however, the Group's own retail business developed positively in this market as well. Driven by the industry's robust development in Eastern Europe, the Group's sales in this sales territory increased 8%, both in the Group's reporting currency and local currencies, totaling EUR 94 million (2012: EUR 87 million).

Despite the difficult market conditions in Southern Europe, HUGO BOSS was able to generate sales growth in Italy and on the Iberian peninsula in fiscal year 2013. Supported by the takeover of various shop-in-shop units, sales on the Iberian peninsula increased by 9% to EUR 95 million (2012: EUR 87 million). In Italy, a 3% sales increase to EUR 50 million was reported (2012: EUR 49 million).

The segment profit for Europe came to EUR 498 million, up 5% year on year (2012: EUR 475 million). It was possible to increase the gross profit margin through the further expansion of the Group's own retail business and strict pricing policy. It was not possible to fully compensate for the accompanying increase in selling and distribution expenses and the expenditure on strengthening local organizational structures. The adjusted EBITDA margin decreased slightly to 34.2% (2012: 34.5%).